What happens when the polls close?

We talked to Maxine, one of the presiding officers in Kirklees, about what happens when the polling stations close at 10pm on Election Day.

We’re talking to people at the election count about why they’re here today. 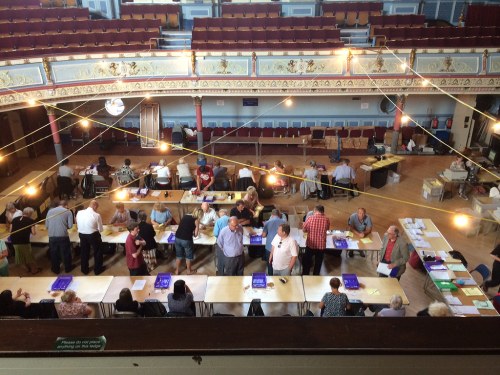 We’ve started election week 2014 with a visit to the opening of the postal votes. The elections staff have been hard at work for weeks getting everything ready for the Local and European elections on 22nd May. The work doesn’t just start on polling day – it’s a huge operation. For example, the process of opening all the postal vote envelopes takes several days and the work is already well under way.

Are you a postal voter? Remember to return your postal vote so that it can be counted. Postal vote envelopes can also be handed in at any Kirklees polling station on Thursday 22nd May. Votes can be accepted right up until the close of polls at 10pm. 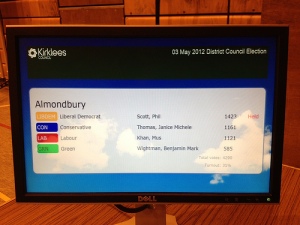 The first results for the local elections in Kirklees are starting to come in.

The Liberal Democrats have held Almondbury.

The Conservatives have gained Lindley from the Liberal Democrats.

The Liberal Democrats have held Cleckheaton.

The Green Party have gained Kirkburton from the Conservatives.

The Green Party have held Newsome.

Waiting for the results

Community reporters at the count – photo by Steve Tuck

We’re here at Huddersfield Sports Centre awaiting the results of the 2012 local elections in Kirklees.

In the meantime, the candidates are all busy observing the counting, but we’re hoping to speak to some of them soon.

Want to know what’s happening whilst you’re waiting for the local election results? Here’s what’s going on at the count:

The collecting of the vote in Holmfirth Civic Hall 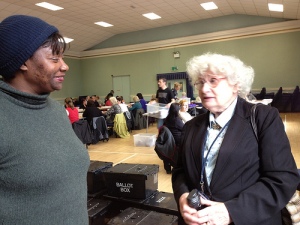 My first experience of being a reporter was at the Holmfirth Civic Hall. We entered the building through the reception lobby then signed in, we were taken into a large room by the receptionist. At first glance there were many tables with lots of dedicated workers opening piles of envelopes, taking out the voter information and placing them on to another pile by adding a rubber band to keep them in place. The piles would then be taken away by one of the electoral workers who would pass them over to another group of workers on computers; the information would be carefully checked on a computer data system.

We met with one of the electoral officers; she had been part of the team for five years. There are seven electoral services staff, responsible for the whole process, including processing all the new applications for postal votes, preparing the information for the voter packs, liaising with the printers, staffing all the polling stations and organising the count.

After the polls close on Thursday, ballot boxes are collected from 23 different wards across Kirklees and taken to two counting venues in Huddersfield and Dewsbury – it’s a huge operation.

It was a real eye-opener for us to see how much work goes on behind the scenes.

The electoral officer who talked to us on the morning said that their families are used to them not being around much during election week.

“We don’t have flowers thrown at us,” she said, “but we know that what we do is valued.”

Lining up the votes

What happens at the election count